How Live and Pre-recorded Videos are Different

Are there differences between live video and pre-recorded videos when it comes to purpose and reach? We chat all about the things you should consider before you decide.

A lot of the time, we look to live videos as almost a bit of a fallback plan, because they are easier to produce than the pre-recorded videos. So today I wanted to share some strategies on how you can leverage one or the other in your business and also, some really key, important things that live video has been able to teach me that pre-recorded videos have NOT.

With pre-recorded videos and live videos, they each have their own place and time that makes one or the other a bit more suitable. And how do you know this? I feel like, myself included, a lot of the time, we just say, you know what? I’m gonna go stream live because it’s a whole lot easier than setting up my light kids and audio and having to edit the videos… so in some ways, live video has become a fallback because it’s so much easier.

One of the KEY main differences is that pre-recorded videos are great for presenting ideas. So, if I ever have to do things like a blog video or a sales page video – anytime I know that I’m going to have to sit down and present very specific information that I don’t want to get lost or don’t want to ramble over, I’ll take the time to script that out and I’ll do that as a pre-recorded video.

You definitely want your sales videos to be a bit more polished and presentable, so pre-recording is the best way to go.

The cool thing is that live videos are made for engagement. And yes, pre-recorded videos are great for building that know, like, and trust factor with your audience; they can consume your content even before you make that connection. But with live videos, it’s still kind of blows me away – we’ve never really had this technology before now.

My background is in the film industry and I worked with cameras long before high definition was even a thing. So back in the day, when we wanted to stream live broadcasts, which were limited to things like the Olympics and sports events, we used to have to have these giant decks that were bigger than me that required two men to carry, plus all these live-switcher cameras in order to stream this event.

Now, we have all this technology that we can bust out of our back pocket so that we’re able to connect with people on the other side of the world. Super, super cool, right?

Live videos are made for engagement. You don’t want to go on live and spew content. You want to take time to say hello, tell me you’re here, and ask questions. That’s going to be really important.

One of the things live video did for me was make me speak clearer. Yeah, live videos can look super polished… but live videos will make you practice speaking on the fly.

If you have any resistance to speaking on video or feeling like you tend to ramble, or maybe you’re the opposite and you think you don’t have anything to say and you freeze up, you’re not alone! The first few videos, I wondered if I should delete them. They were terrible! But they were just so valuable for teaching me.

And I think as adults, we tend to fear things a lot more than children do. If you were to think about being a toddler and learning how to walk and how many times we fell down before we learned to walk, we’d never want to think about facing something like that as an adult!

When we’re put on the spot, we tend to really do everything we can to fight it. My best advice to you is to know that it IS a process, and that’s totally okay. It’ll get a lot easier.

You’ll get to a point where you can ebb and flow and feel comfortable on live streams, but becoming uncomfortable routinely means that things aren’t as scary after we’ve done them quite a bit. When you get to that point, it’s so liberating! You’re like, YES! I totally did it! You’ll still feel the butterflies, but you can get into the flow of it. 🙂

So I want to talk a little bit about algorithms for a second, because we know that each individual platform will always have its preferences. And Facebook, while it might like pre-recorded videos better than images or text, LOVES live video.

What does that mean? It means Facebook is kind of watching your videos – which is a little creepy, but that’s kind of what they’re doing. They’re listening in on whether or not you’re getting the likes, the comments, the interaction and engagement during that live stream. If you are, then Facebook says, yes, this is great social content and I’m actually going to push it out to more viewers because this is share-worthy!

So that’s one thing that is going to be really important as you do your live streams.

(Am I the only one who forgets to ask their viewers to share?!)

PRO TIP: Next time you do a live stream, make sure to say, “Hey, if you’re joining me live say hello so that I know you’re here!” This will help your engagement and Facebook’s algorithm to kick in and push your video up higher. Be sure to ask questions so you’re getting comments!

Because live videos are made to be social, they tend to be shorter, and they always need to lead viewers to something else. So let me just explain this! (And don’t get too caught up in your videos being a certain length, but rather, make sure that you share valuable content in just enough time.)

There’s a technique I see a lot of high level YouTube players using, and maybe you’ve seen this too, and I want to talk about it.

The point of videos is to build the know, like, and trust factor with your audience and potential customers and clients, but it’s really important that your live streams stand as a roadmap to a call to action – to another place for them to go – at the end of your video.

That being said, if you were just doing a live video and your call to action is, “Go grab my lead magnet” – that’s fine and dandy, but not all people are going to go and then click, and then download that lead magnet. So what some people have done is use these shorter social videos on Facebook that actually leads them to their main platform. So whether that’s YouTube, or a YouTube video that’s embedded on your website (and I think a website is always a great place to guide your traffic), but what they’ll do is have a longer, pre-recorded video. For example, it’s a blog video with how-to content, then after that, we’re going to take a snippet of that video and post it on Facebook to get people to go to that original video. Alternatively, what you can do is go on Facebook live and talk about that video a bit more, then, direct that traffic to your main platform. The important thing is that you’re not just ending the view right there on Facebook.

LIVE VIDEO IS MADE TO BE SOCIAL

Facebook is a great way to build those views, but you don’t want that relationship or view to end there. You want them to take action afterwards!

RELATED: How to Get Viewers to Take Action After Watching Your Video

And ideally, you want to send them to your website, because that’s where they can find out more information about you, they might want to download your lead magnet, etc. It’s a great way for them to dive deep and learn more about you!

Now, I don’t want you to feel like you have to go nuts with the content-creation. You don’t have to create a video for YouTube, then a video for Facebook, and all that – but what’s really important that a lot of people miss is that once they create the video, your work is only half done! Now you’ve got this wonderful piece of content that you need to continuously share. Because the truth of the matter is you’re going to usually get way more replay viewers than you will live video watchers tuning in. And that’s a totally natural thing. It’s the way videos and Facebook goes.

The thing that I want you to really take to heart and the ONE key takeaway from all of this is that live videos are social. They are made for engagement. And even YouTube – it’s owned by Google. It’s a different treatment of videos. If somebody looks up how to make videos, YouTube and Google content is gonna come up. Whereas with Facebook, it’s really about how much engagement you get during the live streams that is going to help you get more views and replays. So think about it that way and the key most important thing is that you’re engaging with people! 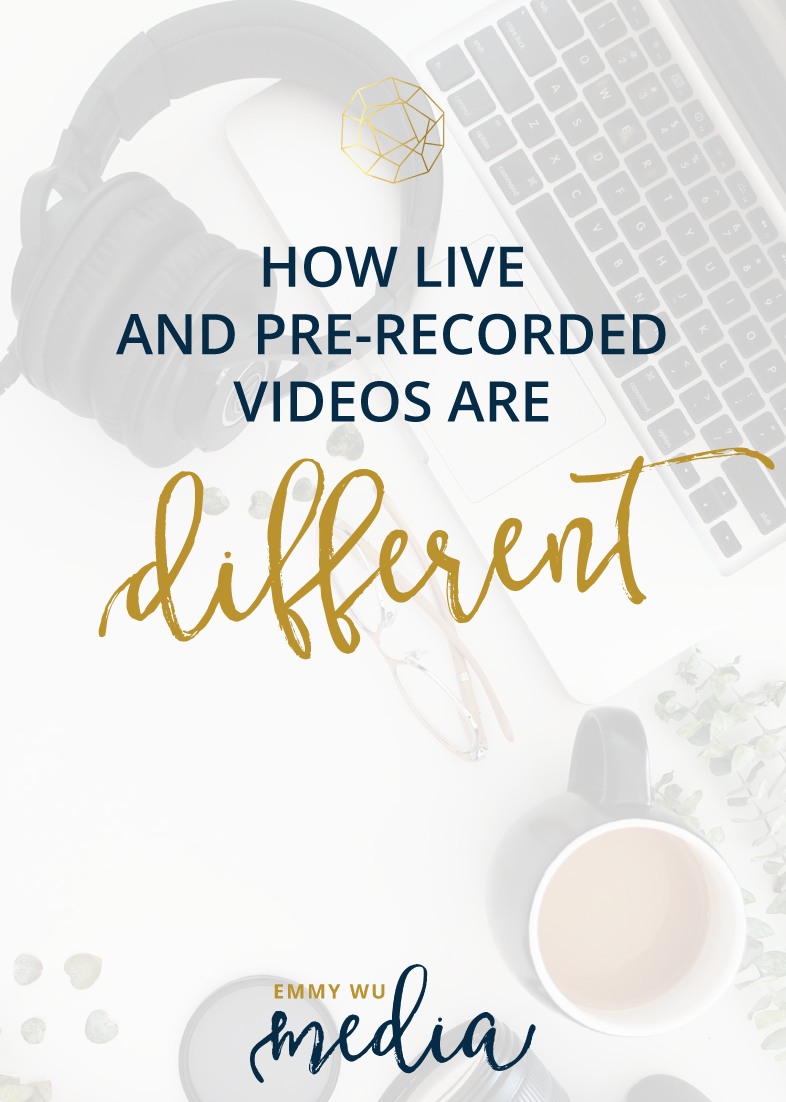 Led by intuition and driven by data, Emmy is a storyteller & strategist who helps visionary entrepreneurs reach more people and create a bigger positive impact, using the power of video.

During her two decade film career, she’s worked with brands like Paramount Pictures, MGM, Subaru, and Real Housewives and bring big-screen-worthy storytelling to small business. Her video strategies have landed her clients their first $24k weekend from a sold out course, to clients booking $800k in less than 2 weeks by focusing on engagement.

At the heart of her work is her love for storytelling: by sharing what we know, we educate, inspire, and create a kinder, more loving world.

We specialize in business & video strategies that gets extraordinary results by showcasing the magic of your story. If you’re a change-maker ready to elevate your online presence and impact, APPLY NOW to explore how we can transform your brand into a legend.